All change….more ducks and donkeys, September 2018 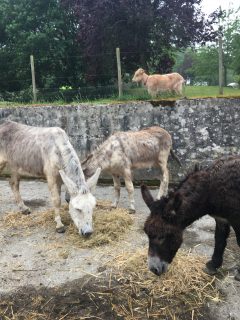 Well our busy summer period is over, and whilst we still have guests we have a little more time to catch up on amongst other things, our blog, which is well out of date – particularly about our ever changing animal population. When we last wrote, we were awaiting the arrival of two new donkey friends for Harry. Tommy & Dennis have been with us for over three months now and have settled in very well.  As we all know change can be unsettling, Harry was a little unsettled by their arrival and it wasn’t initially the friendliest of greetings, although he was of course outnumbered by two bigger donkeys who are very much a ‘pair’!! However, they gradually got to know each other and now happily graze together without incident; there is the occasional territorial donkey ‘grunting’ and ‘humpfing’ over food but that aside they all get along well. Tommy and Dennis took a while to find their voices, but now at regular times during the day we are greeted to a choir of three donkeys!! Each donkey has their own unique sound, Tommy has a deep fog horn sound, Dennis more tentative and Harry is just loud!

Tommy and Dennis are two gentle giants who needed a new home. We believe that they are Andalusian donkeys, they are a beautiful grey colour and significantly bigger than Harry. 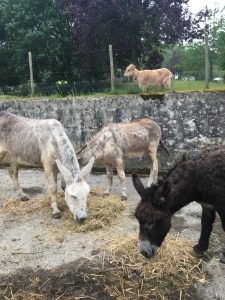 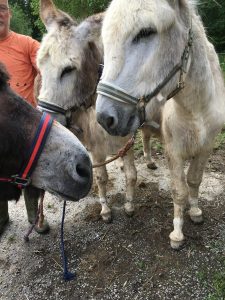 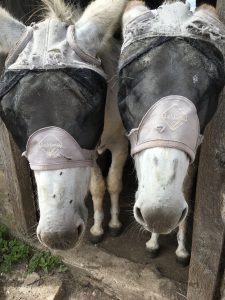 Raja, our one remaining goat, also found the two new arrivals a bit unsettling, especially as they were so much bigger than him, however now he will happily share accommodation with them all and will on occasions push his luck by trying to head butt them!! He has recently decided that he enjoys spending time sitting outside the guest house. It is generally sunny there, and he is likely to get fed and fussed – at times he believes he is a dog!!!

Our ducks have taught us a thing or two about the ups and downs of nature this summer. We watched excitedly as eleven ducklings hatched from a nest that we had been watching for a month, only for seven of them be killed by predators over the following week. We decided to intervene at this stage and for  a short period kept mummy duck and her three remaining ducklings in our garden with their very own paddling pool, until they were big enough to keep themselves safe. 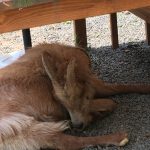 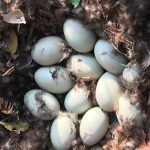 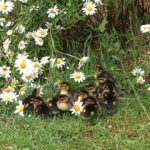 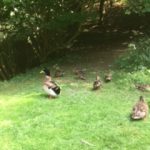 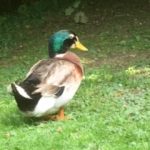 The three remaining ducklings are now young adolescents and over the last few months the remains of their fluffy duckling feathers have all but disappeared. Mummy duck began laying eggs again in the summer and was brooding a nest of eleven eggs however sadly the eggs were infertile and didn’t hatch; once we’d removed the eggs from the nest she was able to devote more of her time to the teenagers who are now well able to fend for themselves. We’ve recently adopted another duck who needed to live somewhere with a pond – a mallard called ‘Willow’. We mistakenly thought he would be the same size as our own ducks but when he arrived realised that he was significantly bigger. Willow had previously lived in a garden without a pond and needed a bigger space to be in, however, when he first arrived he was a bit afraid of swimming on the pond and of the other ducks who weren’t at all sure about this new arrival! We watched and worried about how Willow would cope in this larger woodland space and whether he would be accepted by the other ducks, some of whom would peck him if he went near them. For the first few days, he sat in the middle of the pond and just watched the others, who often just went off leaving him on his own. Gradually he began to follow them and be part of the bigger group and now most of the time waddles around with the others, unless of course they go somewhere like our garden as he doesn’t fit through the fence!!

Our animals are all very friendly and gentle and love meeting our guests; so if you’d like to meet them, we know they’d love to meet you!

You can also make a reservation or ask any questions by contacting us via telephone or email :